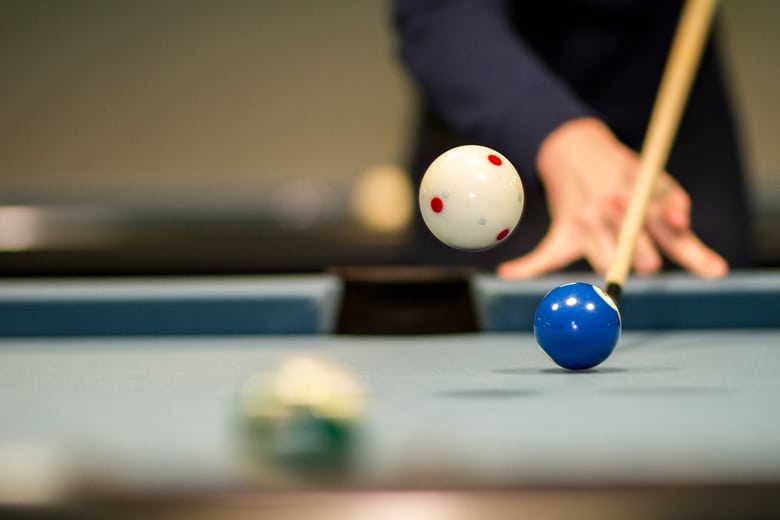 You have probably seen people doing pool table trick shots where the cue ball is launched over one or more balls to hit or pocket a third one. Of course, such shots take a great deal of skill, but you can make their execution a lot easier with a dedicated jump cue.

Before moving on to the best jump cue reviews, let’s dispense with one of the most commonly asked question about jump cues – Do I need one? Well, you need it as much as you need a sauté pan for simmering sauces – it’s not absolutely necessary, but it is the best tool for the job. In the same vein, you can learn to make jump shots using a top rated pool cue, or even a beginners pool cue, but it will be far easier for you to jump the cue ball with a specialist jump cue.

As with all recommendations, the best jump cue is a little subjective, but below are three great jump cues for a variety of budgets.

The Predator Air 2 Jump Cue is a newer version of the traditional Air (which is now retired).  The original Predator Air was a very good cue and may pool players have been eagerly awaiting the arrival of the next generation Air 2.

The cue features 3-piece construction, with the back joint being a standard Uni-Lock quick-release, while the main joint comes with a mini-radial pin (also Uni-Lock). This should guarantee the optimal balance between feel and sturdiness.

The dual-role break/jump pool cue from Action cues is exactly what it reads on the tin – a jump cue.  The cue is available in four distinct flavors to suit various play-styles – 18-ounce (for more effective break shots), 19-ounce (standard all-round performance), 20-ounce (recommended for beginners) and 21-ounce (more spin, but also more chance of an unsolicited english (spin)).

If you are looking for a dedicated jump cue on a budget, then you might want to check out the 2-piece one from Lucasi. The overall length is 41 inches, while the weight comes in at  9.5 ounces.

Buying Guide: How to Choose the Best Jump Pool Cue

Unsurprisingly, shopping for the best jump pool cue overlaps a fair bit with finding the best regular cue. Most of the considerations are the same, and the specific purpose makes it even easier. Granted, at the end of the day, the single most deciding factor is the way the cue feels in your hands, but there are ways to narrow down the choice, as we will see presently.

Most people will start by deciding on a budget, but this may be a mistake, seeing as it can severely limit your choice if you set it too low. A much effective way of doing things is finding all the features you need/desire, and then considering whether the price is acceptable. In any cases, quality jump cues will rarely sell for less than a 100 dollars, although some manufacturers manage to keep the price down in their beginner-oriented lines.

When it comes to shaft material, jump cues overlap with their regular counterparts – you will want to go with wood cues rather than graphite or fiberglass due to its superior flexibility. Granted, wood cues are at a greater risk of bending out of shape, but with proper maintenance this really isn’t an issue.

Jump cues differ from their regular counterparts in that they are lighter and shorter. These cues feature a second joint (right above its wrap line), which lets you remove the bottom part of the cue. This reduces the weight by approximately 50%, which goes a long way to increasing swing speed and force, making jump shots easier to execute. As far as the length goes, the average jump cue is about 40–41 inches long (40 inches being the minimum allowed length for tournament play).

The tip on a typical jump cue will be phenolic resin or an even harder material, rather than the usual leather. This type of material doesn’t do as good a job of holding chalk or imparting high levels of spin on the cue ball, but they do transfer a great deal of energy to it, which helps with executing the shot.

Due to the lighter weight, you can swing a jump cue with much greater speed (and, therefore, force) than your playing cue. This, in turn, also makes it well-suited for break shots, though that will depend on whether you’re accustomed to making that type of shots with a lighter cue. All things considered, both jump cues and break cues are specialty sticks, and although buying one that can do both will save you time and money, it’s less than ideal.

Unless you have the money to spend, you should avoid any decorations on your cue. They do look nice and potentially help it hold value (in case you’re considering reselling it), but they add nothing to the playability and a decent amount to the price.

As far as accessories go, you don’t have to spend hundreds of dollars at one go (this especially applies to novices). Over time, you will learn what accessories you need, and which ones you can do without, and collect accordingly. That said, you will probably want to get a good pool cue case as soon as possible in order to protect your stick. Money-wise, about a third of your initial budget should cover the cost of a cue case.

Do you have an alternative to the best jump cues we chose above?  Let us know in the comments.