You are here: Home / Indoor Games / Beer Pong / How to Play Beer Pong 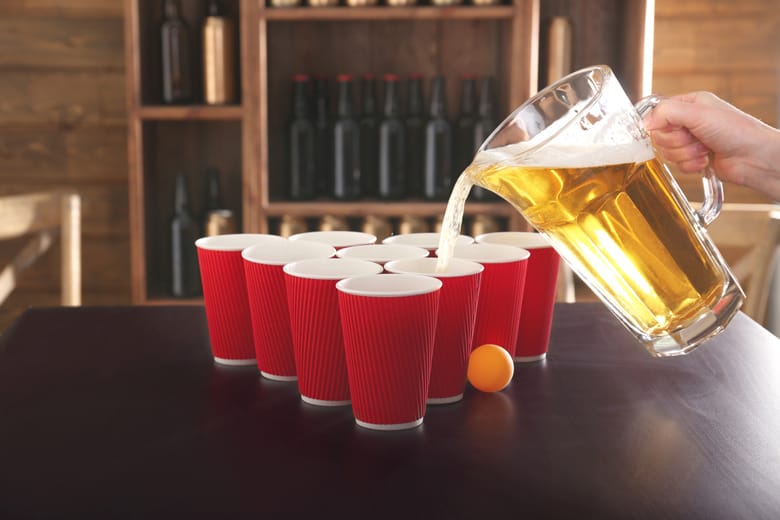 Beer Pong, just the words themselves bring back memories of red solo cups, Budweiser beer, ping pong balls, and college. This sport is one that no one can go to college and not have played, or at least not have heard about. However, if you have never heard of Beer Pong , you might not know quite how to play this drinking game.   Read on, for everything you need to know – from the rules of play, to the equipment to use.

This is a great game to play in your man cave or outside when the weather is good but before we go any further and learn how to play beer pong, let me start by saying you don’t need to play this game with beer or any type of alcohol beverage but if you do, make sure your are the legal age and drink responsibly.  I have been told it can be a fun game without alcohol – End Public Message.

How to Play Beer Pong

The first thing you need to know when you set up for a rousing game of Beer Pong is what equipment you need. There are actually Beer Pong tables on the market that you can buy, especially if this is a game that is going to be regularly played in the man cave, outside or college frat house. Table dimensions should be 8 feet long by 2 feet wide by 27 inches tall. However, if you don’t want to spend the money on an official table, it is possible to use other flat areas such as the floor, a long table or a ping pong table. As long as it is a flat, stable surface then you are good to go.

Next, you will need beer pong balls, or in other words, ping pong balls. These balls are crushed easily, so make sure to keep a few extra’s around. They are usually sold in packs of six. Red solo cups seem to be the cups of choice, but they can come in multiple color options. The official cup size is 16-ozs, so it doesn’t matter if the cup is a red solo or not as long as it’s the right size.

There are generally two types of Beer Pong Formation, a 10 cup triangle or a 6 cup triangle. So if you are playing the 10 cup triangle formation you will require 22 cups in all. 10 for each team and one to rinse the ball. 10 of these will be on the beer pong rack and have beer in them, the other one will have water inside instead of beer to clean the ball.

Why the water? Because there are reports of a possibility of players catching germs and colds from playing beer pong when the ball hits the floor, touches several hands and then falls into a cup of beer for someone to drink. So use the 11th cup to clean the beer pong balls after each throw – oh and make sure you regularly rinse and refill the cup with new clean water. After all, you don’t want to be using dirty balls to pop into cups, now do you?

Of course you can use many different beer pong formations if you so wish depending your house rules, however the 10 cup and 6 cup triangle set-up are the most common. Teams will position themselves on opposite ends of the table and two balls will be used throughout the game. The water cups should be filled to the top with water and the beer cups filled 1/3 full of beer.

The official game is played with 2 teams of 2. So you need at least three friends over though you can have more and take turns. However, you can play 1 v 1, 3 v 3, 4 v 4 – however many players can you fit round the table!

The rules for beer pong are really simple. To determine who goes first, you need an eye to eye challenge between two players. In other words, the players stare one another down as they try to get a ball in the cup.

The scoring is pretty simple as well.

Of course, as with any drinking game out there, you will want to know tips and tricks to help you win or, at least, play the game well.

This is a quick overview to help you learn how to play beer pong. Whether you are playing in your games room, at a party, in a tournament or at college, you should now have a clear understanding of the game and how much fun it can be for you and your friends.