What happens when you combine table tennis, regular tennis and badminton? You get pickleball, of course. It’s not as old as the three sports it derives from, but it’s far from new. Throughout this article, we’ll cover the pickleball basics, from when and where it started, the rules and requirements, and some tips and tricks on how to play pickleball and actually win. Granted, it started as a recreational activity and the players, but there are tournaments for the competitive types out there. 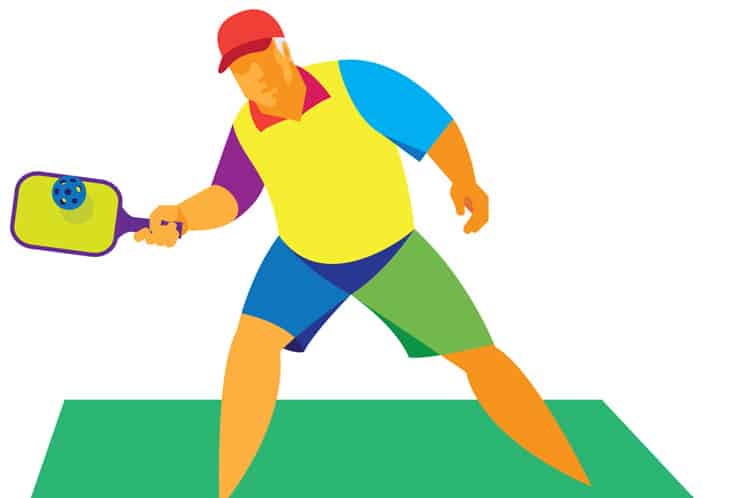 Pickleball takes elements from tennis, table tennis and badminton. In a nutshell, the game is played on a badminton court (indoor or outdoor), using a Wiffle ball, a tennis style net and paddles that wouldn’t feel out of place at a ping pong table. Although it’s more than half a century old, the game has exploded in popularity in recent years. This rings especially true in the US, where it comes from, but also in Canada, India, New Zealand, as well as some European countries (predominantly Spain, France and Belgium, and Finland).

A Bit of Background

As the story goes, pickleball came into being on a summer afternoon way back in 1965. Joel Pritchard (former State Representative for the State of Washington) and a couple of his friends returned from golfing one Saturday finding their families lacking for entertainment. To remedy the situation, they proposed playing badminton. Unfortunately, they had trouble finding the shuttlecock, so they had to improvise using a Wiffle ball (for those of you not in the know, a Wiffle ball is a lightweight plastic ball with holes in it). Next they lowered the net they had set up for badminton and fashioned a few plywood paddles.

As for the name, there are two versions that we are aware of, the first being the cuter.  The name derives from the name of Pritchard’s dog, Pickles, who undoubtedly tried to participate in the game. The other story behind the name is a bit less cutesy and actually has to do with boating. Namely, a “pickle boat” – a boat with a mixed crew, much like pickle ball is a sport with mixed elements.  The pickleball association also tells both stories on their history of the game page.  We prefer the first version, but whichever version is true – it’s a very catchy name. Below is a great interview with one of the founders on how the name was chosen.

Who Can Play Pickleball?

Anyone and everyone, but it’s very popular with the senior crowd. As the saying goes, the older you get, the better you were as an athlete back in the day, but there are plenty of folks who remain very active and have great energies levels as they age.  And Pickleball is a great fun alternative to tennis, but without so much running about.  You don’t need to cover the same amount of ground, plus you can set up a court in your back yard, garden or park, so pickleball comes as a great compromise.

As for the regulations, the game is primarily a recreational activity that you can play either in singles or doubles, in whatever combo you desire, with no age restrictions or whatnot. However, there are indeed tournaments, which accommodate three categories – separate singles, doubles and mixed doubles.

How to Play Pickleball?

As mentioned before, the court is a slightly modified badminton court measuring in at 20ft x 44ft for both singles and doubles. In other words, it’s exactly the size of a doubles badminton court. As far as the net goes, you’ll want it hung at 34in at its center, and 36in on either end. This, as mentioned, attracts older players, as well as really young kids, who can still win without having to run too far.

The markings on the court are adopted from tennis, in that the court has to be striped. The inner zones extend 7ft on either side of the net, and are considered non-volley zones (for the absolute novices, this means you have to keep your feet behind it when hitting a volley).

The key rule in pickleball is that only the serving side can score a point. Speaking of serves, pickleball players serve with an underhand stroke, making contact upon the ball below navel level. The server needs to be standing behind the baseline on one side (the match typically starts on the right hand side) from the center line and aiming diagonally (much like in all of pickleball’s “parent” sports).

with, you have to serve it underhand, using an upward motion. That means no sidearm or overhand. After that initial move, you can play the ball whichever way you like, but the serve itself has to be with an underhand stroke and under the waist level.

As mentioned earlier, the first 7 feet on either side of the net is a no-volley zone, and in pickleball, it’s called “the kitchen”. You are not allowed to go into the kitchen and hit a volley (hit it on the fly) under any circumstances. Of course, if you see the ball falling into the kitchen, you are allowed to enter the zone beforehand, wait for the ball to bounce, and return it over the net. But, beware, if you’re in the kitchen, and the ball hits you, and it’s the opponent’s serve, you forfeit the point.

The game is usually played up to eleven points, and the score is called out as 3 numbers – server score, receiver score and the server number (applies only when playing doubles). If the server (be it in singles or doubles) scores a point, they move to the other side of their court and continue serving. One such continuous streak is called a rally, and it ends when the serving side makes a fault. Then the opponent takes up the serve and the process repeats until one of the teams (or players) scores eleven.

In singles, there’s an additional bit of twist – the server always plays from the right hand side if their score is even and vice versa, if the score is odd, they play it from the left hand side. As you can see, pickleball is not only a great way to stay in shape physically, but also mentally.

Hopefully you now know how to play pickleball and have learnt a little bit of history about this great, fun game you can play outdoors and indoors.  Have you got some pickleball tips or information to share?  Drop us a comment below.