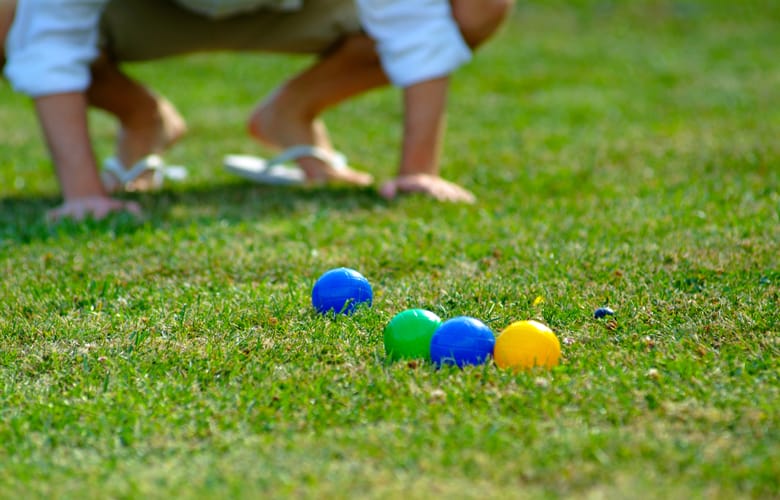 Bocce is an inside or outside game that you can easily pick up and take with you.  With the growing popularity of the game more and more stores are starting to sell bocce ball sets.  But which are the best bocce ball sets for the money?

The honest answer is it depends on your needs and budget.  Do you want a bocce ball set for the beach?  Will you play indoors or outdoors?  To help, we’ll dive into some of the finer points that you need to know when you are choosing your set with our buying guide along with 8 of our top rated bocce ball Sets.

What Should It Come With?

The first question is one that is easily answered.  To play bocce you need a set of eight balls, called bocces.  These will be divided up between two teams, so it would be helpful to have some easy way to separate them out, often this is accomplished by two sets of colors.  Additionally, you’ll need the smaller pallino.  This will be your target.  That is the basics to get you started.   The better sets will also include a storage or carry case that will make taking your game to the playing venue easier than trying to carry the set loose or in a rucksack.  Some will come with a sturdy wooden box, while others might come in a bag.

The governing bodies of bocce state that the bocce should be 107 mm.  There are some places that will allow women to use a 106 mm bocce.  There are companies that will make bocces that can be as small as 74 mm or as large as 109 mm. The weight is supposed to be 920 g for a 107 mm bocce.  If you think that you are going to play in a competition it is a wise choice to get a set that is regulation size.  On the other hand if you are just looking for fun simply make sure that all the balls are the same size and weight.   Also, if you will have younger or smaller players joining in a game, it might  be a good decision to get a set that is a bit smaller than what would be considered regulation.

The materials used are the biggest difference between the cheaper sets and the high-quality sets.  In a high-grade bocce set the balls will be produced from thermoset resins or metal.  This will make for a heavier ball, but one that will roll straight and will not easily pick up dings and dents.  Some middle tier bocces will have a shell of these resins that gives you the nice hard outer, but the inside is made up of other filler materials.  This change can cause a ball that won’t always roll straight and the weights between the set may vary.  Other mid tier sets can be made of rubber.   The lowest cost options can have a shell made of plastic and be filled with water.  These sets while inexpensive are not made to last or perform as well.

Grabbing a cheaper set is fine if you don’t plan on being too invested in bocce, but going for the absolutely cheapest possible option out there isn’t recommended. Some sets have balls filled with water to give you the feeling of weight, which isn’t good at all since proper balls shouldn’t be hollow, but completely solid. So just go a bit above that standard and you’ll be on the right track.

In short, if the set’s going to see a lot of play, don’t hesitate to pay a little extra for something that’s good quality. It’ll pay off immensely in the long run, seeing as the lesser quality sets will get damaged unpleasantly fast. Moreover, the more expensive ones always come with a really nice carrying case, which is just one of those small touches that might tip the scale if you’re undecided. On the flip side, if this is just the occasional novelty, there’s no need to invest in something crazy, so stick with a bocce ball set that’ll be easier on your wallet for now.

Bocce can be played on a variety surfaces, both indoor and outdoors.   Surfaces tend to be hard, therefore, the sturdier the ball the longer the set will last.  That being said, you can play beach bocce and can still have a lot of fun with a cheaper set where the balls will not go through the same wear and tear as playing on a hard surface.

Bocce is the Italian game but there is a similar French game called pentaque.  This game uses a ball that is usually smaller and a different weight.  You’ll want to avoid getting a set of balls for pentaque if you are looking to play bocce, as they will perform differently and not be allowed if used in tournaments.  Also, you don’t want to go with a set of balls that claim that they will work for either game.

One of the appeals of bocce is that it is a simple game, with simple rules and only a small amount of equipment required to play.  Before making a purchase, consider who will be playing, whether you will be entering tournaments or playing just with friends and the type of surface you will be playing on.  This will help you choose the best bocce ball set for your circumstances.