You are here: Home / Indoor Games / Board Games / Simple Rules of Backgammon – A Quick Tutorial on How to Play This Classic Game 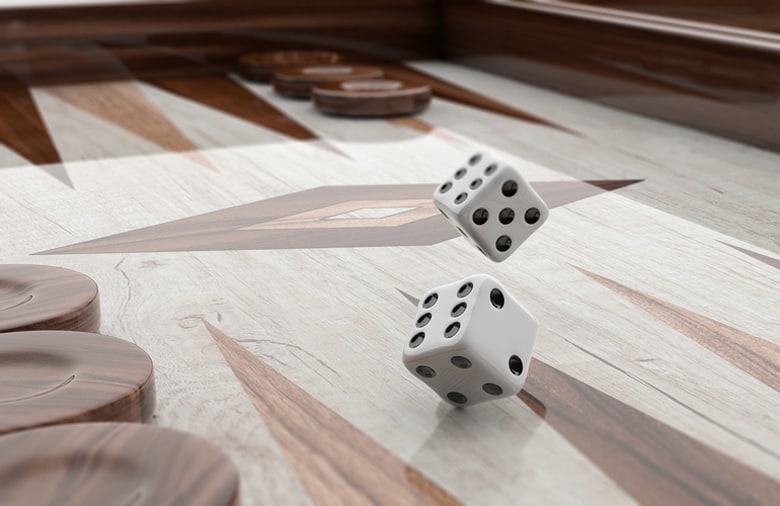 Backgammon is one of the oldest known board games. You’ve probably seen the board before as it often comes on the reverse side of chess or checkers boards.  All you need is the board, a pair of dice, a doubling cube (more on that later) and some tokens to start playing backgammon.  This does assume that you know how to play backgammon and have an understanding of the rules of backgammon.  This is where we can help –  Let’s take a look at how to play this classic.

To start off, backgammon is a two-player game that is about 5000 years old. In addition to the board, you will need fifteen markers for each player, a standard set of dice and a doubling cube. This cube is marked with the numbers 2, 4, 8, 16, 32 and 64. This cube won’t be rolled like a die, it is more of a marker. The game only takes about a minute to set up but the play could range anywhere from 5 minutes to a full hour. The objective is to remove all your pieces from the board before your opponent can remove theirs. You accomplish this by moving the pieces around the board in a horseshoe pattern.

The backgammon board has 12 triangles, called points, on each side and since you loop around in a horseshoe there are 24 points overall to move through. Generally, the higher numbers for you will be the closer side. You’ll start with two markers on the 24-point, three on the 8-point, and five on the 13-point and the 60-point. Movement is in opposite directions and players take turns moving.

To start off the game each player will roll a single die. The one with the higher number gets to go first and use the numbers on both dice for their movement. Players may only move their markers from a higher numbered point to a lower numbered one that is open. A point is considered open if it has less than two markers of the other color. The number from each die is a considered a separate move, so if you roll a 5 and a 4 you can move one marker 5 spots and another 4 spots. You can move a single marker 9 spaces in this example, so long as there is an open space on either the 4 or the 5 spot in the middle.

Doubles and Ending Your Turn

If you roll doubles you can use each number twice. This means that instead of being able to two moves you will be able to make a total of 4 moves. On your turn, you must use all the moves possible. If you find yourself able to move based on either number you have to use the larger of the two. Your turn ends when you have no more moves possible, which includes ending your turn after your roll if you have no possible moves.

If a player has a single marker on a point and the opposite player lands on that point, the first player’s marker is placed on the bar in the middle of the board (between points 6 and 7). This is called hitting. On your turn, if you have a marker on the bar you must move it off the bar (called entering) before making any other move. Moving it off the bar counts as one, so on a roll of three, you could move it off the bar and to the second point. If neither point is open your turn ends. You cannot any other pieces until all your makers are from the bar.

When all fifteen of your markers are on the final 6 points (known as your home board), you can begin the process of removing them from the board. This is called bearing off. You start with the highest number that you rolled and use it to make a legal move, for example, if you roll a 6 you can move one marker from the 6-point off the board. If you roll that 6 with no marker on the corresponding point, you can and must move a marker off the next highest number point that you have a marker on.

Backgammon is normally played over the course of several games. Normally the play begins at each point being worth 1 point with the long-term objective to reach an agreed upon a number of points. At the start of a game, the doubling cube will display 64 (to mean 1) and be placed halfway between the players. If a player feels that they have an advantage, at the start of any turn they can propose doubling the stakes. This must be done before dice are rolled for that turn. If the opposite player agrees the doubling cube is moved to the next level. (64 to 2, 2 to 4 and so on). The player that offered the double moves the cube to their side of the board. Should the opposite player decline the doubling then the game is forfeit, with the player that offered the double getting the current stakes. There are no limits to the amount of doubling, but the same player can’t offer a double twice in a row.

At the end of the game if the losing playing has managed to move at least one marker off the board the losing player will lose only the stakes shown for the game. If a player has not moved any markers off the board they are considered gammoned. In this case, they will lose twice the stakes for the game. If the loser still has a marker either on the bar or all the way back to the winner’s home board, that player is considered backgammoned. In this case, they end up losing triple the stakes of the game.

In case some of you are more visual learners, below is a great beginner backgammon tutorial video on setting up the board, ready to play.

This is a short overview on how to play backgammon and should be able to get you started. There are some other various optional rules of backgammon and methods for playing with larger groups. It is best to start off simple and if you find that you enjoy the game (and have an opponent of a nearly equal skill level) then you can find some further rules online.