You are here: Home / Indoor Games / Board Games / 5 Unusual Man Cave Board Games to try on Game Night 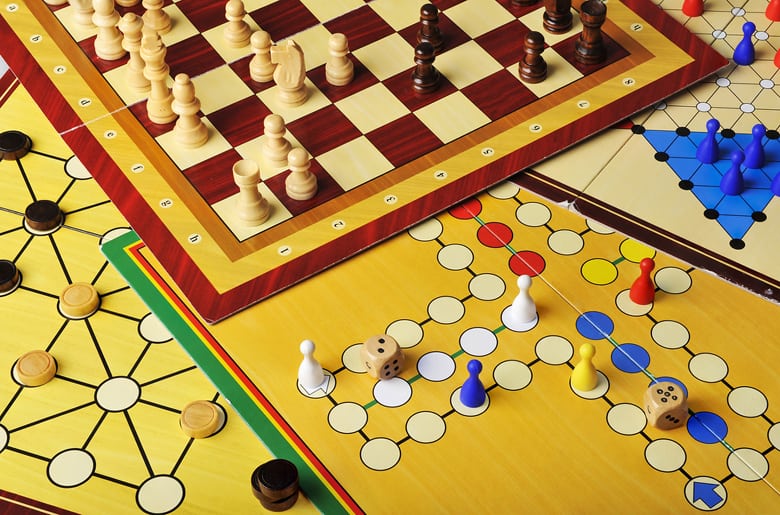 People have been playing board and table top games for hundreds to thousands of years and many view these as just children’s entertainment. However, if you are only used to the mass market games that are put out by big companies you should know that there is a whole other world of table top and board games.

While it is hard to keep up with what the latest craze is, there are some fantastic classics that should have a place in your man cave or games room. Let’s take a look at a few.

This game dates back to the late 1800’s, but it is still alive and well today. It even sports a world championship held yearly. This tabletop game is somewhat similar to marbles but has a dash of curling tossed in for good measure. It can be for two to four players. On a player’s turn they flick a disc toward the scoring area of the board, trying to knock other players out and getting the most points for themselves.

If you are interested and want to invest in a quality board look no further than that Tournament Sized Crokinole Board from Heritage Products. This beautiful all wood board will look stunning as it sports a maple frame with a sharp-looking Baltic Birch plywood playing surface.

The board is official tournament sized, so you’ll be all set to practice for the world championships. The set comes with just black and natural playing discs.

View the Crokinole Board on Amazon

Pros:
This board is an extremely sharp-looking board that you’ll want to find a place to leave out on display when not in use. It is crafted from materials that are designed for a long and useful life while being durable enough to use, even if you take up playing after imbibing some beverages. The discs are extremely clear to see and know which player they belong to, no matter what the lighting in the room that you are playing.

Considerations:
There are a few things to note here, none of them all that bad. The first is the price, if you are looking to try this game out the price of the board might be a little steep. Also, this board is 8 pounds. Having a solid wood frame adds weight and this is by no means extremely heavy, but it might not be a great selection if you are looking to bring this to a friend’s house frequently. Finally, the set only comes with discs for two players. If you want to play with more you’ll want to pick up some other colors.

This game was born out of billiards, originally it would have been played on a flat surface and the balls would have been hit by cues. Eventually, this shifted to a slightly inclined table with a plunger. The game would continue to evolve into pinball. With this, however, there are no flippers, you shoot a number of balls trying to get them into the highest scoring areas. While only one player goes at a time it is simple to make a tournament of any number of players.

There are any number of versions of this game that can be acquired for a wide range of prices. You’ll often see cheap plastic copies of the game sold for children to carry about. If you are looking for one that you would be proud to show off next time your friends come around, consider the Bagatelle Table from Nagina International .

This one is crafted from solid wood and has a hand sanded finish. It is brought up to a semi-gloss finish to give it that smooth surface that still looks remarkable. Steel balls and brass pins have been selected to give it a very upscale look.

View the Bagatelle Game on Amazon

Pros:
This game is made of high-quality materials that have been designed to last a lifetime or longer while still looking amazing. The velvet on the bottom ensures that your game will not shift during play nor will it mark up the table it is placed on. The company is willing to stand behind their work and are happy to return the product if you are not satisfied with it. They offer two sizes to ensure that you have one that fits just where you would like it to.

Considerations:
Due to the layout of this game, there is no way to stack it unless it is on the top. This could make storage a little tricky if you are limited on open spaces to store your games between uses. Also, since there is no top to it, if the board is knocked over during play or storage the steel balls are free to roll anywhere.

This game has its roots in an ancient game, known as carrom, however, it is very similar to the more modern air hockey. The difference here is that there is no need for a special table that blows air up to help the puck move along. In this two-player game, each player gets a plastic hockey stick and you try to get the puck into the opponent’s goal.

If you are looking for some hockey action, but aren’t that good on a pair of skates Nok Hockey from Carrom might just be the game for you. This board is nearly 2 foot by 3 foot with a wooden frame ringing the “rink”. That rink is crafted from hard board to allow a smooth surface for the puck to glide over.

The set comes with two small hockey sticks and two pucks (so you have a back up). There are two different versions available, with the main difference being the graphics printed on them. Everything comes assembled and ready for use.

Pros:
This is a great low tech two player game. The rink is crafted to be able to stand up to some abuse, so you can feel free to really let go with your slap-shots. The hockey sticks included making the game feel more like an actual hockey game than the round ones used in air hockey. The board is smooth enough that there is no need to wax the puck in order to get it flying all over the board.

Considerations:
While playing the size of the board might be a pro when it comes time to store it somewhere it becomes somewhat of a con. While it is just a flat board it isn’t exactly shelf stable, meaning it will probably end up leaned against something with the puck and sticks stored elsewhere. Additionally, the included rules aren’t very comprehensive, but the idea of the game is basic enough and a simple internet search will provide any number of more detailed rules.

This is an ancient game, one that goes back to the Roman empire. Two players each have nine tokens. In phase one you place the tokens on the board, trying to get them in lines of three. Phase two requires you to move your pieces along the lines of the board to form lines of three again. When you form a line of three you remove an opponent’s piece from the board. The goal is to get your opponent to only have two pieces left.

If you are looking for a basic game that involves strategy with quality components look no further than Brain Games Nine Men’s Morris. This set is all wooden and is less than 6 inches on each side.

The game board becomes its own box for easy storage and carry. Each token has the end painted one of two colors to easily tell which piece belongs to which side. The lines showing where pieces can move are clear if a little thin.

Pros:
This is a handcrafted wooden piece that can last for years upon years if cared for. All the pieces can be stored inside the game board, making this a game that is easy to carry to your friend’s home or man cave so you can play where ever you find yourself.

Considerations:
The main con is not so much for this version as for the game itself. It is considered to be solved, meaning much like tic-tac-toe if you know the game you can cause ever game to end in a stalemate.

Shove Ha’ Penny is another ancient game that has found a home in pubs of the United Kingdom. In this game two players try to flick coins up an inclined board, getting them to come to rest between the scoring lines, known as beds. This game calls for more than just hitting coins and hoping the end up where you want them, as if you get too many coins in a bed you’ll help your opponent.

If you are looking to be able to either get in some practice at home or challenge your friends to a game without heading to the pub, consider the Master’s Shove Ha’ Penny Board.

This solid wood board sports a veneer to help the coins slide well. The veneer is also marked with scoring lines and has edges ready for marking with the provided chalk. This board also comes with 5 half pennies for a more traditional gaming experience.

View the Shove Ha’Penny Board on Amazon.

Pros:
This board is designed to be used and enjoyed. It sports solid construction and comes with everything that you need to be able to play a game. The board has enough heft that you don’t need to worry about it moving during an errant strike, trying to get your half penny to bed.

Considerations:
This board is not recommended for tournament play, so if you are looking to get ready for a competition you may want to consider a different board. Additionally, you will want to take care in how you clean the board, as some chemicals may remove the scoring lines.

Even in this world of digital entertainment and games on our mobile phones, there is still a place for old fashion table top games. Instead of trying to keep up with the latest innovation in modern board games, why not consider a well-appointed classic game for your home.

We have covered 5 different options for your consideration, but we would love to hear from you. Is there a favorite that we missed? Or perhaps you want to share some more about one of our picks? Please let us know in the comment section below.