You are here: Home / Indoor Games / Pool / The Difference Between Pool and Billiards

A very common question from beginner pool or billiards players is what is the difference between pool and billiards? Over time, both names have been used to describe each game.  Billiards is often used to describe a game of pool when in fact they have evolved in to different games.  Both games remain under the Billiards cue sport family umbrella. 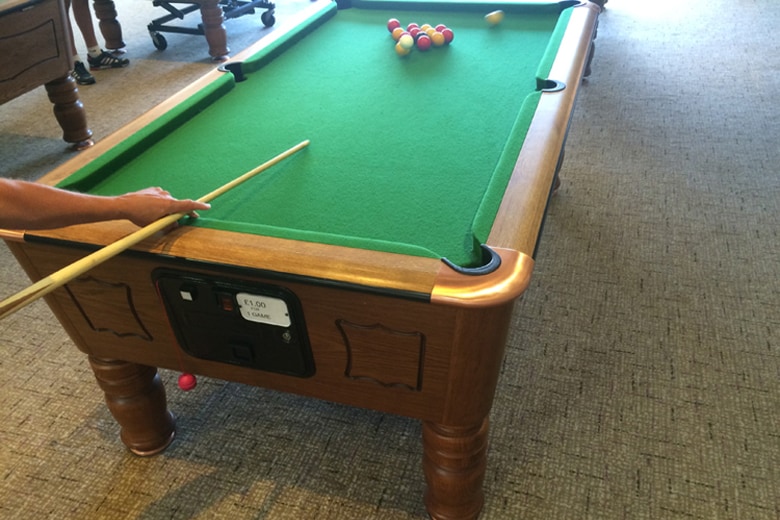 An easy way to explain the difference is to provide a brief description of how each game is played.  We will then describe how they differ.

Billiards dates back to 15th century France when it was a form of Croquet.  During the next few centuries it evolved becoming an extremely popular game in the late 19th and early 20th centuries. Unlike pool, true billiards only requires three balls. There are different versions / games to play.  The main object of Billiards is to hit one ball against the other two balls by either hitting the cue ball into both balls or the cue ball into a second ball that then hits the third ball. There are also points scored if you hit a specific number of cushions (banks shots).

The three main variants are:

English 3 ball Billiards – This is played on a full size snooker table (12ft x 6ft) with 6 pockets. You can score points by potting the one of the three balls by hitting one-off the other.

American 4 ball Billiards – This is played on a similar sized table to English 3 ball, but only has 4 pockets. Because there is one more ball, there are more opportunities to score points than in 3 ball billiards.

Carom Billiards – In this version, apart from only using 3 balls, there is a difference is the pool and billiards table. The Carom Billiards table has no pockets and is played on a smaller table than English 3 ball and American 4 ball version. You score points by hitting a cue ball onto the other 2 balls. Variants may include 3 cushion billiards where you have to use the cue ball to hit and the other 2 balls as well as the cushion 3 times (any of the 3 balls can hit the cushion in any order as long as the total is 3 times or more). It has its own international and US organisations that are separate to the World Pool & Billiards Association

Pool was also originally known as pocket billiards. In some areas, mainly USA / Canada it is still referred to as pocket billiards but internationally, this cue sport is known as pool. It is called Pool because Billiards tables were often set-up in pool halls (gambling halls) for patrons to play on whilst placing and waiting for best to come-in. The name stuck and the game developed into what it is today.

Pool is an extremely popular game throughout the world, especially in the USA and Europe.  The game is played on a rectangle pool table. The table will have 6 pockets, one at each corner and one (in the middle) of each of the two longest sides of the table. You can see the pockets clearly on the pool table (1st image) above.

There are several different types of pool games you can play on a pool table but two of the most popular games are 8 ball pool and 9 ball pool:

8 Ball Pool – This is played with a cue ball, 2 sets of eight balls, either spots and stripes or reds and yellows and a black ball. The object of the game is pot all 8 of your colors or spots / strips and finally the black ball, before your opponent.

9 Ball Pool – This is played with a cue ball and 9 numbered balls. The object of this game is to pot the balls starting with the lowest number first. The winner is the person who pots the final 9 ball.

The object of the both 8 ball and 9 ball games are similar in nature though – hit the cue ball against a target ball with the aim of potting the target ball in to a pocket.

The Difference Between Pool and Billiards

So as you can see, Billiards and Pool started as one and the same many centuries ago and have evolved over time. They still share many similarities.  Both are commonly played on a slate bed pool table and you hit a cue ball against another ball with a pool or billiards cue. However, certainly with Carom Billiards, the difference between pool and billiards tables is that one has pockets and one does not.