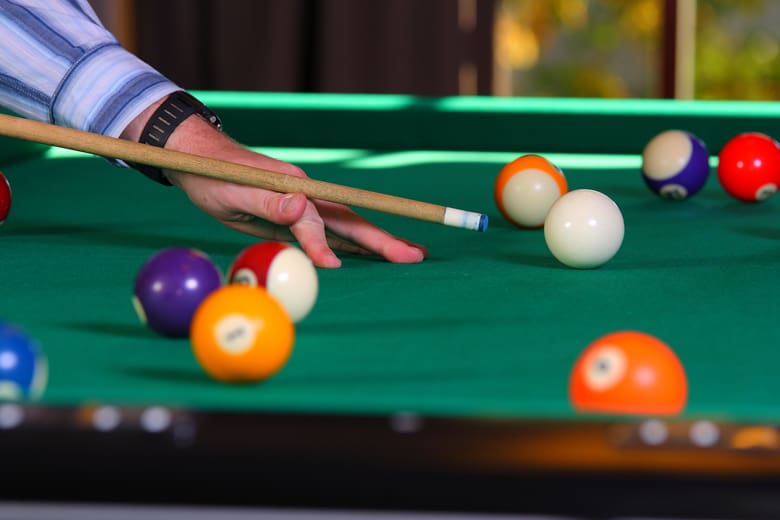 So you’ve got yourself a pool table for the Man Cave and now you want to improve your game so you can hustle your mates when they come over.  Below are some pool tips for beginners and key areas to focus on.

Now, here’s a nickel’s worth of free advice that we’ll repeat later on, but it’s just so damn important that it warrants being mentioned twice – focus on the bridge. This can’t be stressed enough, as it’s a very common mistake and one that creates bad habits that won’t leave you in a hurry.

Once you’ve drilled how to bridge correctly, you can start learning the rest of the pool basics – proper stance and grip, stroke and follow-through, the works. You should lay foundations, as it were, and improve continually. Go slow, spend some time just watching and learning. If you haven’t done it beforehand, study the rules.  There are different pool games – such as 8 ball and 9 ball pool.  You can read the actual rule books, or watch other folks play and ask questions.

Now, the very first physical thing you’ll want to do is sort out the stance – keep your feet spread apart as comfortable as you like, keeping them faced towards the target ball at a slight angle. Your body ought to be somewhat off to the side, so that your head comes naturally right on top of the cue when you bend over. This gives you the best possible view of your target. Once you’re nice and comfy, lower the head and aim down the cue as you would a rifle. You should hold the cue at a balance point – you’ll know you got it right if you’re stroking arm from the elbow down is hanging relaxed.

About the bridge – it’s important to have a solid bridge in order to glide the tip of the cue stick consistently. There are, basically, two types of bridges for your hand.  The closed bridge is where your index finger is wrapped around the cue and is resting on your thumb.  The open bridge is where your thumb is squeezed against your hand and upwards, creating a V for the cue to glide on.  Below is a video that clearly explains each.

There are 5 variations that are used to put different spins on the cue ball, or English, as you’ve probably heard it called. Speaking of which, there are four spins you’ll need to learn sooner or later – backspin to get the cue ball back to you when it hits the target ball, top spin to follow the ball that is hit, left spin and right spin. A good rule of thumb when applying English is never to hit the cue ball more than one cue-tip’s width from the center of the ball.

A half decent pool cue can make a difference to your game.  We’re not advocating spending a lot of money on a pro cue or buying a separate jump cue or a cue used for breaking when you first start playing, but a cue with a good cue tip will provide better connections when hitting the cue ball.

Which leads me nicely on to chalk.  You’ve probably seen people in movies and real life chalk their cue-tips before every shot, and if you’ve ever played pool before, you’ve certainly done it yourself without knowing why. The chalk provides grip when you hit the cue ball, allowing for better cue ball control and spin.  The traction keeps the cue from sliding off the cue ball too fast.

Study the more advanced players, paying special attention to the little things such as how far apart their legs are, the way they’re holding their bridge, how they’re preparing for the shot. Sure enough, the execution is far more interesting than preparation, but it accounts for only one half of the whole shot. Don’t go straight for the flashy stuff, either. Trick shots look cool and all, but in no way will this help you learn the basics; walk first, run later.

On a similar note, you should make conscious efforts to take things slowly and make your shots smooth and controlled. You’re playing with your elbows and hands only, the rest of the body is there to support and nothing else .

Below is a great video that goes through a lot of basics to help you become more consistent with your game when you’re new to pool / billiards.

Finally, make sure to always smile. Not only will this help relieve the tension, but it will give an illusion of confidence and make your opponent wonder what you’re thinking. Eventually, you’ll build up the confidence and the smiles will become real.