You are here: Home / Outdoor Fun / Disc Golf / Disc Golf – How to Play and Simple Rules For Beginners 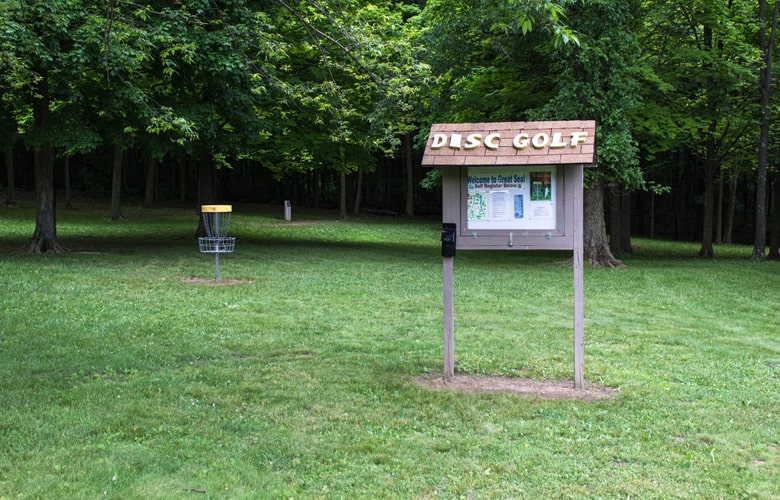 I am a great lover of Golf.  In my spare time, when not in the man cave, I love a round of golf with the boys, but recently I have found out about a new ‘golf’ game called Disc Golf.  Disc golf is played much like the traditional game of golf. The difference here is that instead of clubs and balls, you use a set of Frisbee discs (though the terminology is pretty much the same even in this regard, as we’ll see shortly).

The two sports share the same thrills and pitfalls, from teeing off to sinking the putt. Both require you to make the putt in as few shots as possible, or, in the case of disc golf, as few throws as possible. Moreover, both require you to negotiate obstacles as you progress down the fairway, making consecutive throws from the last lie (where the ball, or disc landed the previous time).

Who can play Disc Golf?

Anyone and everyone, in a nutshell. Both men and women, old and young, people trying to get in shape and those wishing to stay in shape, those with limited leisure time and folks that have it in excess, irrespective of financial status and whatever hindrance or advantage you can think of. The only thing you need to keep in mind is to pace yourself according to your capabilities and time available.

There are a fair number of disc golf courses around the world. Even if it weren’t so, there is nothing stopping you from making your own course – just do what the pioneers of the game did and use trees, lamp posts, Gazebos and whatever else objects fit your fancy as targets.

The community is significant, with well over a hundred thousand members playing professionally worldwide, and growing fast. The competitive aspect of the game is under the auspices of the PDGA (Professional Disc Golf Association), with the recreational bit falling under the RDGA. Both organizations were founded by “the father of disc golf” and man who figured out how to make Frisbee fly level and fast, “Steady” Ed Headrick.

How to Play Disc Golf

As mentioned above, disc golf plays much like its “older brother”, the traditional ball golf. The courses typically have nine or eighteen holes, with some special cases having as few as three. Of course, it goes without saying that each course is unique, with its own obstacles and challenges, such as hillocks, bodies of water, or, most commonly, trees and bushes.

Most holes will have what is called an out-of-bound area, or zone, or simply OB. Typically, if your disc lands in one of these, you’ll have to add a penalty throw to your score. Alternatively, some may have special rules and penalties, such as forcing you to tee off again or throw from a special spot. Recreational players can get creative here. Another restriction you’ll see on some holes is the mandatory flight path, which requires you to throw the disc above or below a certain height.

There are typically several tees per hole to suit players of different levels and abilities, which are normally in the form of a pad (artificial turf, asphalt, concrete, gravel, rubber, or just plain padded ground). Each tee will have a map next to it depicting the hole, its out-of-bound zones, distance, as well as requisite paths (if any), plus a distinctive name for the hole.

Players tee off from these pads and then take turns according to the distance they achieved, with the one farthest from the hole throwing first (typically in small groups, five or fewer people). Then, rinse and repeat.

The goal here is to reach the hole in as few throws as possible, just like in traditional golf, with points scored once the disc rests in the basket or chains (or, if you’re more traditionally bent, once you hit the tree or big rock you agreed is the target). Each hole has a required number of throws, called par, and the players are awarded the points in accordance with the number of throws over or under the par.

You do not need to a lot of equipment to get started.  To start you could use a frisbee and a tree as a target.  However, as you get a bit more serious and start to enjoy the game there are a few items that you will need.

It should be noted that disc golf Frisbees are different from what you can usually find in that they’re slightly heavier (about 4 to 7 ounces), with beveled rims and the greater portion of their mass to the edges, which greatly contributes to stability.

Speaking of stability, each disc is designed with a specific role in mind, just like clubs in golf (and the roles are getting more specific as the tech progresses). There are two features to keep in mind here – turn and fade. The former refers to how the disc will fly during the first to thirds of the flight (at high speeds), while the latter references the way the disc flies during the latter third (as it loses speed).

This is important as it allows you to gauge any individual hole and pick the disc that would be the most appropriate for it. Both fade and turn are rated on a scale (each manufacturer has its own), which refer to how much the disc will bank during either stage of its flight.

There are to major styles of throwing, backhand and sidearm (although the latter has been somewhat erroneously called forehand, probably in analogy to tennis).

Backhand throw is what you’ve usually used if you’ve ever picked up a Frisbee – drawing the disc rapidly across the front of your body and then flicking it outwards (though the snap is not necessary). This technique is favorable to long and precise shots.

Forehand, aka sidearm throw is less precise and powerful than a backhand throw, although it has its applications (what those application might be is still a matter of hot debate in the community). The way you do will also vary from player to player, but the gist is that you draw it from behind and in part across the front, throwing it with an obligatory flick (baseball players should recognize the throw).

There are a number of trick and/or specialty shot that are rarely used, such as the overhead (aka Hatchet or Tomahawk), ideal for getting over obstacles. Then, there’s also the Hyzer, when you need the disc to take a sharp turn, or the Anhyzer, when you want to move it the opposite way. The roller is another example, thrown either backhand or sidearm, and it’s used when you have a mandatory path condition

Hopefully the above has given you enough information so that you can head outdoors and have a fun game of Disc Golf.  If not, check out this disc golf article for more on the history of the game.   If you have any tips or tricks to share on Disc Golf, drop us a comment in the comment box below.