When you hear the word “sport”, what is the first thing that comes to mind? Football? Basketball? Hockey? Golf, perhaps? How about the first ten things? Interestingly enough, for an ever-increasing number of people (just over 100,000 registered players and growing), the go-to answer would be disc golf, aka Frisbee golf.   So, what is disc golf, exactly? 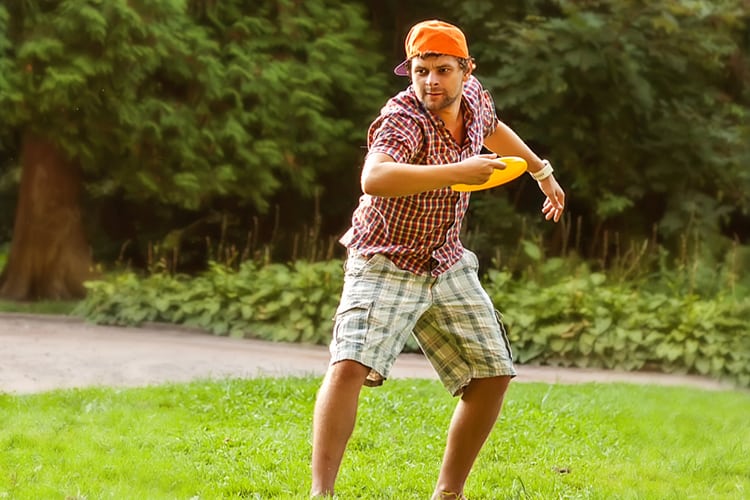 What is Disc Golf?

Some might describe it as playing Frisbee on a golf course, and they would be right, to an extent. Disc golf is much more elaborate than what the above description may imply, and challenging as well, especially if we consider the competitive part of the community. Speaking of which, it’s worth noting that the sport (and it is indeed a sport, make no mistake about that) is quite big in the US.  So much so that there is a professional governing body, the PDGA (Professional Disc Golf Association) which deals with the competitive and leisure aspects, respectively.

Origin of disc golf and its early history

Interestingly enough, disc golf is much older than you would think, having been invented somewhere at the beginning of the 20th century. The very first recorded game took place in 1926 in Bladworth, situated in Canada’s Saskatchewan province (which was itself merely two decades old at the time).

A group of children from the local elementary school came up with the game, playing it on the school ground, but catching little attention. Of course, seeing how Frisbee as we know it today through Wham-O came into being quite a bit later (and got the name we all recognize it by even later), the original game was played with tin lid. The objective being to throw said lids aiming for the 4-foot wide circles drawn onto the sandy ground. Eventually, the children grew up, went their respective ways and the game was all but forgotten.

The abovementioned state of affairs lasted until early 1960s, when groups of people across the States and Canada started playing their own versions of the game. For example, the students attending Rice University (Houston, TX) played a game that involved using trees for targets. Similarly, the residents of Augusta, GA, played a version of the game using the trash cans in Pendleton King Park as targets.  The teens of Santa Barbara played a more varied style of the game at Alameda Park with trees, lamp posts, fountains and even Gazebos as something to aim at.

Speaking of laying the groundwork for modern disc golf, much like with James Naismith and basketball there’s one name that keeps popping up – that of “Steady Ed” Headrick, an inventor and Wham-O employee. Headrick was the founder of the IFA (International Frisbee Association), as well as the DGA (Disc Golf Association), which later evolved into two separate organizations – the P(rofessional)DGA and the R(ecreational)DGA. Moreover, Headrick pretty much singlehandedly laid down the competitive standards for a variety of disc sports, but disc golf was his pet project, so to speak.

As mentioned earlier, in the beginning, pretty much any open space could constitute a disc golf course (so, yes, golf courses are indeed an option, but not an ideal one). Not much has changed since those times in this regard. What did change, however, were the targets. The early versions of the game used trees, lamp posts, trash cans and other assorted whatnot as goals, and many recreational players continue to do so. The game changer were the pole holes introduced by “Steady Ed” Headrick, which are, in a nutshell, baskets mounted on poles with chains that serve as disc-catchers above them (the baskets, not the discs).  The disc basket standardized the game and made scoring much easier as it eliminated uncertainties about whether the shot made proper contact or not.

It all began with Kevin Donnelly and George Sappenfield, who popularized the sport throughout California during the sixties, with significant help from Wham-O (the producer of Frisbee). The whole thing reached a crescendo in 1965 with a full-fledged tournament completely sponsored by Wham-O, with the company supplying the discs to throw and hula hoops to use as targets.
Today, there are tournaments organized throughout the year, even during winter (in an attempt to show the sport is indeed sustainable year round). The majority of the tournaments are held in the States, with the biggest event being the one in Austin, TX. Toronto, as far as we know, is the only city outside the US to host a major disc golf tournament under the auspices of the PDGA.

There are a number of different sports played with Frisbee, two of which have a major following all around the world. Disc golf is one, obviously, and the other is Ultimate Frisbee, often shortened to just Ultimate (it’s not as old as disc golf, but they both saw a tremendous rise in popularity in the sixties). This one’s even bigger, with over five million players in the US alone. For the sake of brevity, let’s just describe it as football with Frisbee.

A few other sports exist, fairly popular, but not nearly as big, such as guts (dodge ball with Frisbee), freestyle Frisbee (pretty much what it reads on the tin – acrobatics with a disc), or double disc court (nothing quite looks like it, though there are elements of volleyball and ping pong in it).

Why Should I Care about Disc Golf?

In the briefest of terms, disc golf is for anyone and everyone. Novice players can take off slowly and build up their fitness and concentration by negotiating the course and mastering shots, respectively. Similarly, it offers more experienced players a great way of staying in shape, both mentally and physically. Moreover, it’s cheap (you only need discs and a disc golf backpack to carry them), quick to learn and doesn’t take up much time.  So it suits those with limited budget and/or limited time.  Plus it’s heaps of fun!