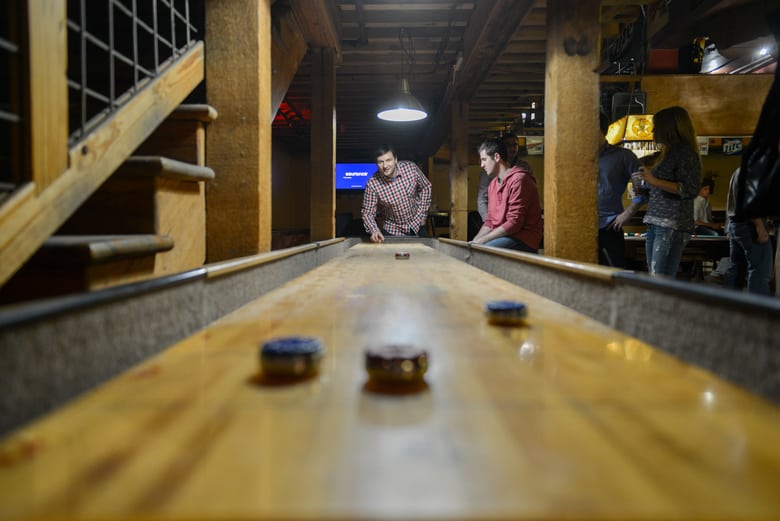 Shuffleboard is a game that is common in many bars in the United States and extremely popular to play at home. In recent years, the popularity of the game has spread to other countries as well. Before you start you will need to understand the rules of shuffleboard.  At Man Cave kings we like to keep this simple and easy to understand so below are simple table shuffleboard rules along with some basic shuffleboard tips.

The game is designed for two to four people to play and if you play like my friends and family, it can get quite competitive. The object of Shuffleboard is to push your puck from your end of the table to the other end of the table in order to score points. While the game may seem pretty simple, there are different versions and different rules. With that being said, read on below for some of the rules of shuffleboard you will need to know.

You can play Shuffleboard in a variety of environments and both indoors and outdoors. Indoor Table Shuffleboard is quite popular now, and the rules are listed below.

Setting up the game is pretty easy. The first thing you need to have is a table, 8 pucks (4 each), and shuffleboard wax. The wax helps your puck to glide across the table, and the game won’t be easy to play without it. Please note, not all wax are the same as some are designed to make the game more difficult than others.

Once you have your table set-up and ready to play, gather your pucks to one end of the table.

Two Players (One v One)

You can play a two player or a four player game. For two player games, each person takes their four pucks and stands at the same end of the table and takes in turn pushing their pucks to the score zone at the opposite end of the table. The first to either 15 or 21 points wins (unless you agree a predetermined number of points to win.

The two v two game is very similar to the one v one game except the game is played from both ends rather than just one. One member of each team stands at one end of the table and plays 4 pucks each (exactly the same as one v one). This is followed by the other two players at the other end of the table playing against each other. The winner is the first to the agreed points total.

If two opposing pucks are in the same score zone, for example, both in the 2 point zone, then the puck that is closest to the end of the table wins the points.

There is a way to score 4 points with one puck. On the rare occasion that the puck reaches then end of the table and hangs over the edge without falling off, the player scores 4 points.

It is legal to knock your players pucks off the board with your pucks, however be careful as this can sometimes backfire if you miss the puck or push it into a higher scoring zone.

So now you have your simple table shuffleboard rules so you can start enjoying this great game. Tournament rules can be more in-depth but for home play the above and below are all you need to start enjoying the game.  To quickly recap for you in bullet point fashion:

If you are still deciding what table to buy, our shuffleboard table reviews may help find you the best table shuffleboard for your budget.  Alternatively, you may want to try Sjoelen / Sjoelbak / Dutch Shuffleboard – a great low-cost alternative.