You are here: Home / Outdoor Fun / Lawn Games / What is Bocce and How do you Play it? 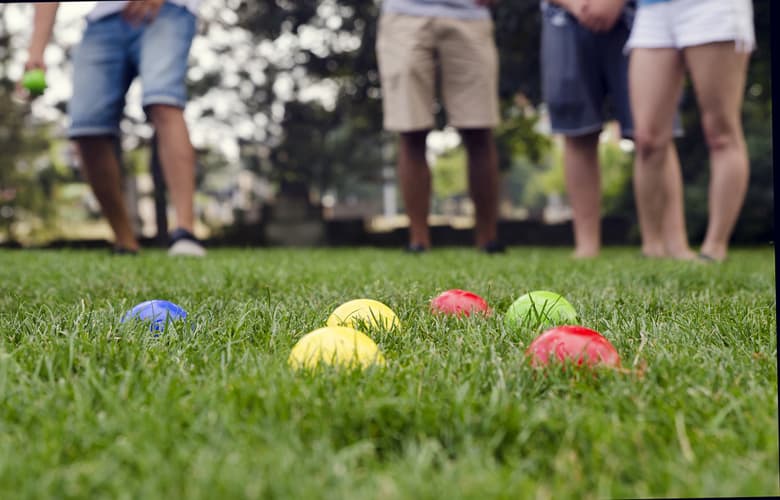 Bocce is a sport that was developed in Italy but has found its way all over the world. Bocce has a lot of similarities to Boules, Petanque and bowls where to you throw or roll a ball, depending on the surface to get near to a smaller ball/target.  The person or team with the nearest ball/(s) to the target wins that round.

Since this sport is a low intensity one, it means that almost anyone can play, and it is enjoyed by the young and the old.  It is mostly played outside, so it is a great excuse to go outside and enjoy the weather. In this article we will go over the rules, equipment needed and how to set up a game.

The History of Bocce Ball

Nobody really knows for certain how old exactly the game is, with some people claiming it dates back to ancient Egypt, or listing Greece as its main birthplace. Most believe that it was derived from the ancient games played by the troops of the Roman Empire. Soldiers would form two teams, and one of them would throw the first, smallest ball which would represent the leader of sorts. After that, they’d continue to throw bigger stones in the direction of the leader ball, so the team with a stone closest to it would be able to score. It was a relaxing game that provided simple entertainment for men, while also allowing the troops to further develop their strategic thinking through the more competitive aspect of the game.

It might just even be the first ball game man has ever played, considering how simple the concept of throwing a stone really is. Even the simple game or marbles is essentially derived from bocce, when you think about it.

The game has advanced to its current, well-known form in Italy. The game’s name “bocce” is a plural of the word “boccia” which translates to ball in Italian. Usually, the balls would be solid and made of either wood or some type of composite, and sometimes even metal.  As far as regional differences go, in England’s variation of the game, they’d use a wheel-like flattened ball as opposed to spherical ones, and the balls in France would commonly be completely hollow, and always made of metal.

In 1900, Bocce was featured for the very first time in the Olympic Games in Paris, as an exhibition sport. Today, the game has plenty of competitive play and many active participants around the globe, with various big tournaments as well as the World Bocce Championship which was first introduced in 1947.

Luckily bocce is a sport that is easy to get into. The playing area is normally 90 ft long and about 8 to 13 feet wide. Generally, it is made of natural soil or asphalt, meaning that you could play on the street, your yard or even on a beach. In addition to the playing area you’ll need 8 larger balls, called bocces. These are divided into two colors, one for each of the teams. These balls are made of metal or plastic and are spherical. Additionally, you’ll need a smaller ball called a pallino – this is the target ball.  A bocce ball set will include everything you need, including a carry case or bag.

In bocce you have two teams playing against each other, these teams can be made up of between 1 and 4 people. With one player on each team you’ll throw 4 balls on each side then walk to the other. 2 players per team can either have one person on each end of the court throwing all 4 balls or walk from side to side and have each player throw 2 balls. With a 3rd player on the team one end will have a single player throw all 4 balls and the other side will have 2 people each throwing 2 balls. Finally, with 4 players per team each side will have two players each throwing 2 balls.

Once the team members are in place one team is chosen to go first, this is often done by coin toss. The team going first gets to throw the pallino. This must pass the centerline but can’t hit the backboard or be closer than 12 inches to the side of the court. If these conditions aren’t meant the other team throws the pallino. Once the pallino is in place it becomes the target for scoring.

Next the first team throws their first ball, trying to get it as close as possible to the pallino. The next team then gets to throw until they either get one of their bocces closer to the pallino than the other team or they run out of bocces. The teams alternate until all the bocces have been thrown. Bocces are allowed to bounce off the sides of the court or hit and move the pallino or another bocce. A bocce that hits the backboard without first hitting the pallino or another bocce is considered dead and removed from play.

The great thing about Bocce is you don’t really need a court to play.  You can play on grass or sand.  Just toss the pallino and start trying to hit the target.

When all the bocces have been thrown, the team with the bocce closest to the pallino is determined. This will be the team that scores for that round. They will get one point for each bocce that is closer to the pallino than the closest bocce from the opposing team. After scoring play will start again from the other end of the court. The scoring team gets to throw both the pallino and the first bocce. A full game is generally played until a team scores 12 points.

Below is a video that demonstrates this game in action on an indoor court.  The second video provides a demonstration of the game, playing outdoors, without at outdoor court.